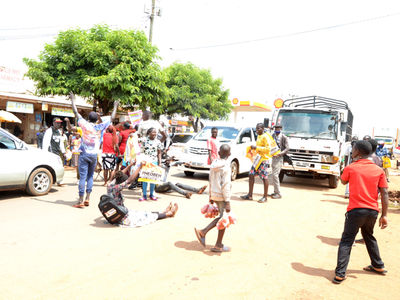 A section of the NRM party supporters in Luweero District on Thursday afternoon paralyzed traffic on the Kampala-Gulu highway in Wobulunzi Town Council in protest of the outcome of recently concluded primary election in which they claim the entire exercise was marred with acts of bribery and doctored results.

The protestors who marched through Wobulenzi Town before blocking traffic near Shell fueling station on the Kampala-Gulu highway, claimed that their candidate, Ms Phoebe Namulindwa, was cheated.
They accused the party electoral officials in the district of doctoring Mr Namulindwa’s Voter Declaration of Result forms and relegated her to the second position yet she had won.
Ms Winnie Nabukeera, a resident of Wobulenzi Town Council told Daily Monitor that they had decided to force their candidate to seek election to the position of Luweero District Woman MP as an Independent candidate.

“We demand that President Museveni intervenes in the Luweero elections saga because the position of the District Woman MP could go to the opposition. The failure to organize a free and fair election is the reason for our protest, Ms Nabukeera claimed.
The September 4 NRM primaries have attracted a big debate in the district after 11 out of the 14 candidates that contested for NRM flag bearers have vowed to contest as independents.

Mr Ali Ndaula Ssekyanzi who contested against Dr JC Muyingo in Bamunanika County on Monday petitioned the NRM electoral commission over allegations of doctored results from particular villages in Kalagala Sub County in favour of Mr Muyingo who was declared winner.

Ms Faridah Nakalawa who contested for the District Woman MP NRM flag bearer and lost wondered how a declaration form from Kakinzi village where she voted together with her family indicated that she got zero votes. I’m coming back as an independent candidate, Nakalawa claimed on Thursday.
However, the district NRM registrar, Mr David Kamugisha dismissed allegations that the primary election exercise was marred with irregularities.
“We have only three petitions although we have heard about the allegations that have not yet been proved to be right,” Mr Kamugisha said on Thursday.

OPINION: Workplace racism is real; how should you respond to it?

While you were sleeping: How Canada performed at Tokyo Olympics Friday, Saturday – National

Malkia Strikers loses against Dominican Republic at the Olympics : The standard Sports